Triumph Tiger 660 Sport test: advantages all over the Channel 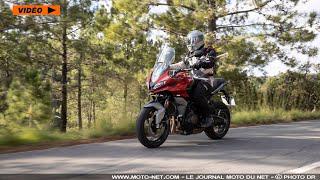 Triumph Tiger 660 Sport test: advantages all over the Channel

Albufeira (Portugal) in mid-December is a bit like Disneyland for the biker: bright sunshine, 18°C ​​and a view overlooking the Atlantic. On one side of the helmet, beaches surrounded by majestic rock faces. On the other, winding and deserted roads in the mountainous countryside of the Algarve... Surely it's a change from the icy, crowded and "radarized" ring road!

Such an environment deserves a motorcycle to match: a medium displacement machine if possible, because it is lighter and more accessible. But with the engine, all the same: even if the landscape is magnificent, there is no question of remaining "stuck" between two contemplative sessions!

A roadster? Yes, good idea... Except that the "all-in-the-quiche" aspect literally throws a chill in the face of the gusts of fresh wind coming from the ocean, especially at the beginning and end of the day. And then a little extra comfort could not harm, while a large handlebar would encourage improvisation in the pins lined with pines and orange trees.

In short, the ideal motorcycle would be a responsive and playful 600 to 750 cc roadster, but with revised styling and ergonomics to cut the road. Good pick: it is exactly the creed of the Tiger 660 Sport which hands us the handles! This new Triumph unveiled in mid-October is the "trail-GT" interpretation of the Trident 660, exactly as Yamaha does with its popular Tracer 7.

Like its designated target, the Tiger 660 Sport is more of a "high-legged" roadster than a trail: evidenced by its 17-inch spoke rims in 120 and 180 mm, its engine without a shoe, its short silencer at the low exit exposed to shocks or the absence of hand guards and luggage racks as standard (list and price of options in our Technical data sheet on page 3).

Its three-cylinder 660 cc "A2 approved" is taken over as it is in the Trident 660 - moreover Triumph's best-selling machine in France this year with more than 1,900 immats -, which allows it to proudly claim the title of "motorcycle the most powerful in its category" with 81 hp and 64 Nm (details in photos captioned on page 2).

Ditto for its cycle part: tubular steel frame and peripherals are identical, with the exception of the extended and reinforced loop which incorporates handles and suitcase supports as standard. More spacious saddle, widened and raised handlebars, elongated swingarm and travel increased to 150 mm front-rear (120 and 133 mm on Trident) are also on the program. Its shock absorber also incorporates a practical offset knob to adjust its preload.

All these modifications contribute to the elegant presence of the Tiger 660 Sport, whose refined charm sets a new benchmark in the category: the Triumph is a beautiful motorcycle with fluid lines, unlike the tortured features of certain rivals (hello Versys 650 and Tracer 7!). Only the consensuality of its facies can reproach it, with its almond-shaped headlights... like on a Japanese motorcycle, for once!

The Triumph also strikes very hard in terms of perceived quality: its "Made in Thailand" assembly commands admiration with its millimetric adjustments, its impeccable welds, its perfectly grouped and directed sheaths and cables, its two-tone engine casings, its practical angled valves and its scoops which aesthetically conceal its radiator. At 9095 euros, she fears no one in this regard!

Its Showa suspensions and its half-LCD, half-TFT color dashboard also contribute to this positive perception. MNC regrets, however, that a road motorcycle of this standing does not have an adjustable clutch lever, a socket, a real trunk - the yellow vest goes just under the saddle -, even an empty pocket and backlit commodos . Too bad also that its exhaust under the engine deprives it of a central stand to maintain its chain...

"Very easy", getting to grips with the new Hinckley Tiger! The Tiger 660 Sport wants to be welcoming for the greatest number, even if its formidable compactness favors medium-sized motorcyclists: the tallest lack space to relax their legs, as is often the case with medium-capacity motorcycles. Especially when they derive from a roadster as small as the Trident!

A 1.75m driver poses with his feet flat on each side, despite his saddle raised from 805 to 835 mm and his bulkier tank (17.2 l Vs 14 l on Trident). The arch is judiciously preserved through the narrowing of the front of the seat and the indentations of the tank. The passenger seat raises the guest pleasantly, in addition to providing adequate space and accessible handles (MNC tested when stationary, but not while driving).

The 834 mm handlebar (+ 49 mm Vs Trident) falls ideally in the gloves, while straightening the bust vertically for the benefits of comfort. Same satisfaction regarding the height adjustment - over 8.3 cm - of the windshield: just reach out to the arch at the bottom of the bubble, then exert pressure upwards or downwards.

Simple and functional, this mechanism with notches, however, emits unpleasant creaks when sliding... Its protection also reveals limits: if the bust and shoulders are suitably sheltered, this is not the case for the head. which remains too exposed.

The deflection painfully reaches the eye level of a 1m75 driver: impossible, therefore, to ride with a modular helmet in the open position above 90 km/h (at 4000 rpm in 6th gear, by the way ). Turbulence at the top of the head is also felt beyond 130 km / h (6250 rpm): too bad, it's not played much.

The first maneuvers validate a good turning radius and a relatively contained weight (206 kg Vs 196 kg for the Tracer 7), as well as the exquisite sound of the "Triple": the engine purrs dully and without the hiss of the old generations of Triumph , please! Its rocky melody is rounder and more pleasant than a twin.

Although a bit sticky at low speed, the Tiger 660 Sport shows promising approval on its road skills. At this stage, MNC only blames it for its fairly firm and too distant clutch lever, its selection which is also quite rough and the "bowl" format of its saddle: the small and medium riders slide forward, which is missing by elsewhere padding. Reverse of accessibility…

Pilots 1m80 and over do not experience the same discomfort, as they can step back on the more spacious and thicker part. Adults and children alike would appreciate, on the other hand, rubbers on the footrests to filter the slight vibrations perceptible in the boots – and the handlebars – after mid-range. Nothing out of the ordinary, however.

A Tiger in the engine!

The Tiger 660's three-cylinder engine is steered by a cable-free throttle and two riding modes (road and rain), which affect the responsiveness of the standard throttle and traction control. Might as well say it bluntly: this engine is a success, with constant availability and pep to spare in the towers!

Hyper flexible, it resumes without flinching at 25 km/h in third gear and restarts like a joke at only 40 km/h in sixth gear: developments in the city are more simple, because it doesn't matter what gear is engaged! Enough to ignore the roughness of its “clutch / selection” assembly.

The successful calibration of its "ride-by-wire" offers a precise dosage of acceleration, while its chain transmission is - fortunately - devoid of the slightest jerk. The Tiger is "3-legged" in velvet! This comfortable roundness continues between 2000 and 4000 rpm with sympathetic reminders in view of its displacement, if not very demonstrative.

Then the "Tiger" pulls out its claws and gets really angry as it passes 5000 rpm, as if to say: "now, no more dawdling"! Its flights even become ultra-tonic between 7,000 and 10,000 rpm, a good operating range that ends with a downright sporty extension. The whip in the towers is a treat in the winding portions.

It's a two-sided engine, but with a response in all circumstances: "90%" of its torque would be available between "3600 and 9750 rpm", according to Triumph. To the point of sometimes evoking a larger displacement, a flattering feeling reinforced by the fairly short staggering of the first three reports while the 5th and 6th are less reactive because they are more geared down.

A great motorcycle, a fun and punchy engine: what more could you ask for? Good suspensions and braking in unison, of course! Unfortunately, the shoe pinches precisely on these aspects on the Tiger 660 Sport despite the prestigious note brought by its Showa and Nissin fittings...

Its fork lacks hydraulic support in the second part of the race, while its shock absorber, on the contrary, shows stiffness on shocks of medium to strong intensity. This singular lack of cohesion - rare in Triumph - is the cause of poorly controlled mass transfers and imprecise reactions in sporty driving.

Healthy and promising at a leisurely pace, the Tiger 660 Sport reveals its limits very - too - quickly when the pace increases: it prefers anticipation to improvisation, all the more so on bad surfaces. The bumps bring out the dryness of its shock absorber – as well as the front part of its saddle – to the detriment of comfort and directional stability.

The Triumph prefers trajectories all in roundness with a minimum of constraints on its suspensions, with the entries in turns standing on the brakes followed by an authoritative inclination. Especially since its braking precisely lacks progressiveness: the 2-piston front calipers offer “On-off” reactions, just like the right pedal. The considerable power tumbles out all at once, which doesn't help matters for the fork or the ABS...

This brutal braking because it is difficult to dose accelerates the too hasty crushing of the fork, which does not fulfill its role of "buffer": the entire load is transmitted to the Pilot Road 5, which causes forces greater than the tolerance thresholds of ABS. The direction then begins to “dig in” under the effect of the successions of pressure releases controlled by the anti-lock control unit.

The phenomenon also appears at the rear, which tends to suggest that this ABS is perhaps not the most effective on the market: its triggering seems too hasty and above all too long, which does not fail to make you sting a good sweat. when directional precision is suddenly affected by its coming into action!

The solution consists in balancing the trim of the Tiger 660 Sport before registering it in curves, by combining the action of its engine brake with those of its Nissin calipers. The Triumph, less abused, then reveals real dynamic qualities including a leading chassis.

The bike has exemplary stability in fast curves and benefits from formidable traction, which makes its traction control useless on dry ground. Reactive to orders, it would however gain in maneuverability with a narrower rear tire: 180 mm for a 660 cc of 80 hp, it is neither essential nor economical...

This new Tiger 660 Sport blows hot and cold with its undeniable qualities and sex appeal, which are unfortunately tarnished by a few practical shortcomings and - above all - perfectible damping. Surprising from Triumph who could (should) have done well against a Yamaha regularly criticized on this point.

Moreover, if this novelty is very well placed in its category (see the rivals on page 2), MNC estimates that a 660 cc motorcycle at 9095 euros is not particularly cheap. This is not specific to Triumph: the observation is also valid for its rival Yamaha at 8899 euros. Tomorrow, the 600/700 cc will cost the price of a 1000 cc yesterday!

Beware also of the risks of cannibalization or misunderstanding of the Tiger Triumph range, which includes the Tiger 660 Sport and - recently - the Tiger 850 Sport with very similar arguments (85 hp and 11,500 euros), then the Tiger 900 and Tiger 1200 more off-road oriented. "Mother tiger" can hardly find her young there!

Hence the question of its name "Tiger": why give an adventure connotation to this exclusively road bike? Similarly, and this is a surprise, the qualifier "Sport" does not really seem justified in view of its limits in very sporty driving... A shame.