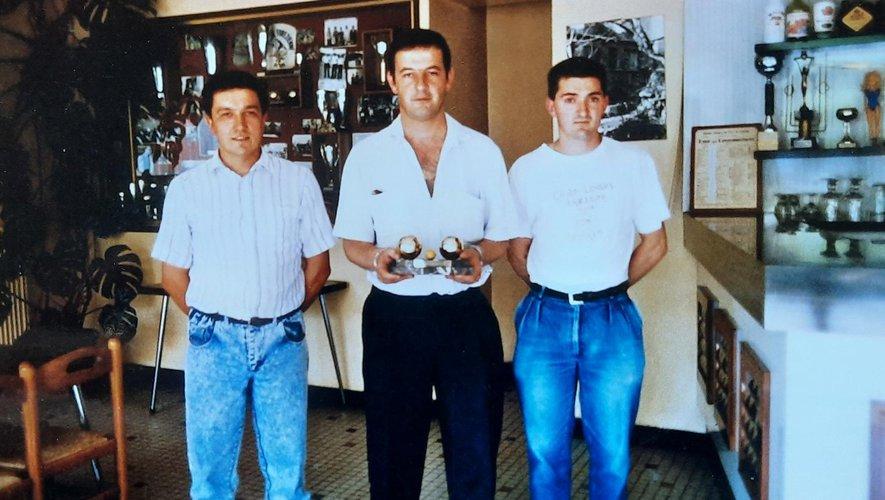 Elian Vidal, played petanque for thirty years and stopped in 2006, but he still follows this sport.

What is your track record?

I started in Combes with Jean-Luc Prat, in juniors, and we won many competitions. Then the "big ones", C. Palis, C. Cercos, S. Panossian, made me play with them, I made a lot of progress in contact with them. Then, in the 1980s, there was the senior triplet with Hervé Grès and Marc Vergnol. I was district champion twice, in junior and senior, in a sector that was by far the toughest... During the Aveyron championships, in doubles, I lost twice in the quarter-finals with Marc Vergnol. In triplets, 2 other times in the round of 16. And once in the quarter-final head to head.

My big regret is in 1984, with Marc Vergnol and Hervé Grès, we were among the favourites.

All of Combes was behind us. The company had offered us a sweatshirt, and we were undoubtedly precursors to sporting a uniform outfit. It must be said that we formed a very complementary team, with real chances. Unfortunately, we lost to the future champions when we were leading 8-1. Fatigue maybe…

Geology IN: How to Identify Common Minerals? | @scoopit https://t.co/7niyJIHfQz

I left to play at Firmi. I won some great competitions with more than 100 teams, notably at Firmi and Decazeville; reached the 16th final doublet at the Millau world championship with my late friend Lionel Gayral, and shone in the B contest of the Aveyronnais with José Rodriguez. At Firmi, we also formed a good triplet with Marc Calmettes and Hervé Grès, at the end of the 1980s and 1990s, falling again in the round of 16 against the future champions.

Your view on pétanque today?

I stopped following my profession (not being available on Saturdays anymore) and I started karate, now yoseikan budo. Being a perfectionist, a purist, I was no longer too much in the spirit of this game, which in my opinion must be a pleasure and a friendly sharing above all.

The mentality is no longer the same. I am also nostalgic for the 1970s and 1980s, with Catusse, Mourino and other champions. Alain Labro was my idol, I admired the person, his calm, his style. Petanque today seems too uniform to me.

Moreover, I regret that the triplet (which is for me the most beautiful game) is less present. Just like not going through the playoffs, it gave a title that got lost, like a lot of things. That said, I still enjoy watching games.