Drague: 9 out of 10 women prefer that men take the first step 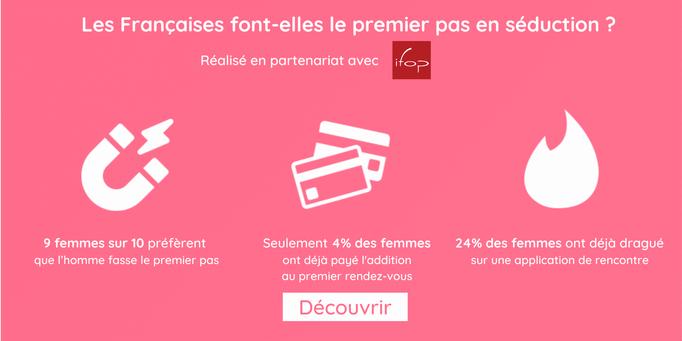 Drague: 9 out of 10 women prefer that men take the first step

Carried out with a sample of 1001 women, representative of the female population aged 18 and over living in metropolitan France, this study shows that the French are gradually freeing themselves from popular beliefs on flirting.They are thus 77% to find normal that a woman takes the initiative of an appointment, 7% more than in 1994.

"However, this development should not mask the disparities that dot female opinion: there is a generational and social gap.The thirties adhere more to the taking of female initiative (84%)) than their elders or the youngest, generally more timid because they are less experienced (72%)) ”, nuance the authors of the report.

The opinions are a little more shared with regard to the sharing of the addition.One in two women (51%)) judges that it is the role of the man to pay her during the first meeting and just as much believe that it is normal that women pay during the first meeting (49%))))."French women express more" conservative "opinions regarding respect for the rules of gallantry (...)) There is a real generational "gap" between the more emancipated young people, and the oldest very marked by these codes governing men/women ", it is noted in the study.

Certain ideas won less votes but still testify to the conservative state of mind of certain women.18% agree with the idea that a woman flirting with a man has something inappropriate.And 17% think that a woman who takes the initiative in terms of seduction does not seek a serious relationship.

However, proof of the evolution of mentalities, a large part of French women a little thwarted preconceptions.Two thirds of women (63%)) claim to have already taken the first step.A third (35%)) indicates that she has already flirted with a man or a woman who liked them in a party or a private evening with friends.In total, nine out of ten women (89%)) have already dredged a person, whatever the place (party, work, internet, etc..)).

For Louise Jussian, of Ifop, "this study reveals to us that the norms of sexist seduction are still anchored in the imagination, including feminine.The "French seduction" embodied in the rules of gallantry still seems to occupy a large place in the representations associated with seduction, especially in heterosexual relationships ".Even if, according to, in full era post #MeToo, "a friction emerges between persistent membership in the obsolete rules of gallantry and the encouraging signs of a female grip".

To see also on the HuffPost: during confinement, he redoubles ingenuity to seduce his neighbor