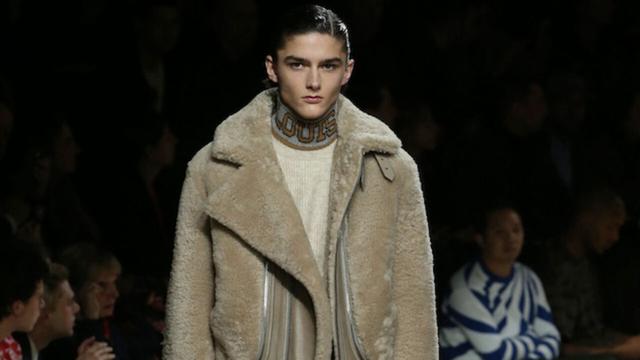 Reminiscence of a street and bling era, generation MTV displaying loud and clear the howling logos of some international luxury titans, who finally assume this heritage, long rejected.The logo will therefore be in all-over, or nothing.

Some trends arise without warning and becoming a must-have seasonal fashion.This is the case of the technical coat with reflective firefighters, seen at Calvin Klein 205w39nyc, Burberry and Junya Watanabe.

From left to right :

Think Richard Gere Circa 1980, American Gigolo period.The Sharp and Oversize Tailoring of Mr. Armani storms fashion and the shoulders are expanding to face a formidable new decade: the Reagan years, the traders of Wall Street build fortunes and the world does not stop polarizing.Times that are reminiscent of the ambient zeitgeist, which prompted the creators to imagine wide, wide, wide jackets and coats like armor.

Inexhaustible sources of dream and hope, the great plains of America Wild West continue to inspire creators, in all fashion capitals.In New York, where Raf Simons probe the US culture with talent for Calvin Klein 205w39nyc and signs the most desirable boots for already three seasons, in Milan with Dsquared2 who imagines a fantasized cowboy Apollo, and in Paris, with Dries Van Notten whoinfused his collection of Ranch accents.

Nose foot with global warming and global disorder that agitates the world or simple seasonal styling game?We let you judge.The fact remains that accumulation is one of the flagship trends of the fall-winter 2018-2019 season, launched with brilliance by Demna Gvasalia, at Balenciaga and clothes.

A wide spectrum of variable geometry tiles oscillating between neo-aristocratic clan tartans in Alexander McQueen, Accents Preppy Clin d'Aber at the cult film Clueless by Amy Heckerling in Versace or Flanelle of Bûcheron passed in the conceptual prism of Sacai.You choose.

Printed on meshes this season: 1/ beep Bip and Coyote at Calvin Klein by Raf Simons, who signs here a new highly Instagrammable collaboration with the Looney Tunes license.2/ Inevitably more subversive in London, Jonathan Anderson tattooed the homoerotic silhouettes of the artist of the fifties openly gay dom -orejudos.3/ By opening his parade with superman comic boards, Rei Kawakubo, sign here a manifesto: stay harmless, keep your candor, for a softer world.

How to pass the test? Answer: pee in a bottle

In elbow with elbow with the bob this season, the cap nevertheless wins the largest number of passages on the fall-winter 2018-2019 parades and offers a lifting made in Italy with Fendi or Gucci-which collaborates with the Giant US MajorLeague Baseball -, while Demna Gvasalia has teamed up with World Food Program, to create a cap, each of which will allow the purchase of 200 high nutritional cookies.

Formal appearance on parades at a time when sportswear is king, tennis striped suit makes a remarkable appearance, appreciated.Seen at Alexander McQueen, Maison Margiela or Versace.

New luxury peaks ... With these rooms, the houses demonstrate their expertise of excellence.So necessarily, it is at Berluti, Hermès or Prada that the most beautiful models of the season are found.

Take the obsession of creators for sportswear and the growing interest of the most hypening circles for technical clothing ("Successioned North Faces") and you get a series of pieces that look like it is mistaken in the high altitude locker room.The difference ?A sewing construction, which combines with brilliant technicality and style.

Their passage makes you smile, but their impact, highly instagrammable, is powerful.The creators did latex and other fetishes including dog, pig or total leather and leather masks a real obsession on podiums. Jeremy Scott a même dédié au latex S&M une collection entière pour Moschino…

And yes, the leopard print is dead this season.And it is the tiger that is gaining ground, the proof with the series of clawed coats, to carry imperatively under rock inflection, to play down the room.

A burst of rhinestones and glitter puts fire to the podiums: the ultimate homage to French Elvis?

The detractors will cry out for cultural appropriation, but we must rather see here a borrowing tribute to the refinement of Japanese or Chinese cultures, including flower sakuras (Haider Ackermann), Chinese folklore (Kenzo) or traditional clothing (Gucci, XanderZhou) inspired the creators.

Scarf, hooded or adorned with head jewelry ... in latex, silk, wool, or pearls ... next winter will be overseen or will not be.

Whether it is the revival of fiery impressions drawn from the archives at Prada, the rebel skulls of Sss World Cop or the sensitive patterns of Wales Bonner, the printed shirt persists until the heart of winter.Refreshing.

Trophy of the locker room, woolen skin is the safe bet to keep a life and to offer itself absolutely to brave the most capricious temperatures.Some of the most beautiful models were made this season by Burberry, Berluti or Louis Vuitton.

Flirting with padding, down jackets and other featherweight -weight fleevery coat the silhouette, to protect the look of modern times.A statement from the first to the last look at Prada, from desirable parts to the delirious fashion quotient at Sacai or GmbH.

The XXS bag, to be confused with the card case, is worn around the neck, as the only accessory of the season to abandon the superfluous and transport only the necessary.

Hybrid folklore or extra large impressions on the jackets, the embroidered flowery print made a discreet appearance on the podiums, with a single watchword: to wear only with concrete insurance.

Seasonal tocade, space conquest and its exploration, - and protection uniform - facing an uncertain world has inspired creators this season.In dystopian version at Undercover or in collaboration with NASA for Heron Preston, the American creator Amount.